Ever felt transparent? Ever reached beyond your grasp? Ever felt pain as a source of connection to the energy inherent in everything? Ever felt shackled by the constraints of country, civilization, collections of others? Soul Spring as a painting arises out of a person’s desire to reach beyond one’s immediate confines. The central figure, rendered semi-transparent by the energy radiation of his pain and circumstances is stretched out in a universe of molecular manifestations. Around him the semi-golden gyre of *aspiraling souls [*hereby coined] ascends toward greater enlightenment. He is shackled back to the materiality of the earth, Australia, Africa, and the American-Canadian continent. The mystical Rood, that giant staff of vertical assurance, is a mark of his ethereal insightfulness, and the mystical albatross, depicted against the gold of the moon, a symbol of his willingness to journey beyond the self. Then too, to the right of the painting is Christ on the cross, a symbol of one’s sacrifice of the self. And all around him are the seeds of virility, of the generative powers of the future, sponged up in the inevitability of the entirety of the universe. It is a painting of the visceral potential in each of us to escape beyond the concrete bonds of our existence. Painted in 1977, when the artist was recovering from a spinal surgery, it was an image that repeated itself so incessantly that he had a friend rig a canvas up above his bed, and he brought the canvas to life. The original is done in Renaissance oil glazes and is 48 x 48 inches (four feet by four feet). Only afterwards, when in university in the 80’s, did the artist come across the poetry and imagery of Blake and Donne, wherein such metaphysical conceit was not only endemic to the mysticism of poetry, but explicitly as apparent. May the piece have ever growing meaning for you too! 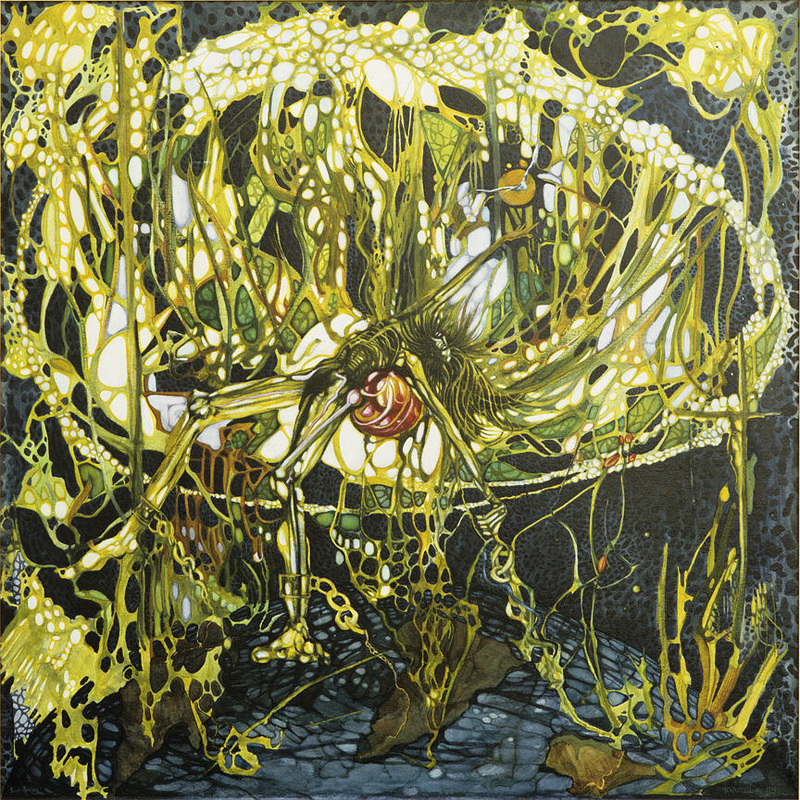